You can run with the ball and pass it, but passing forwards is not allowed.

A try - five points are awarded for touching the ball down in your opponent's goal area.

The game is started by a drop kick from the middle of the halfway line.

A drop-kick is one where the ball hits the ground at the same time as you kick it. You cannot just volley the ball without it touching the ground.

The ball must travel forwards at least 10 metres from the kick-off. If it does not, the opposition get the choice of receiving the kick again, or a scrum or line-out on the halfway line, with the advantage of the feed or throw. 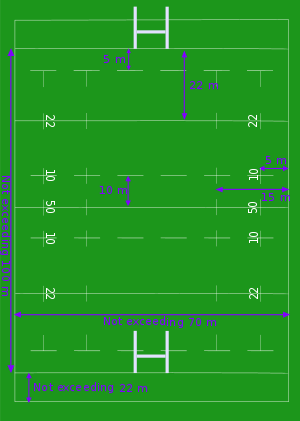 In a team of 15 players you have ‘forwards’ and ‘backs’. Look at the attributes needed for each position, and think what might be the best ones for you to play in lessons.

Forwards (numbers 1-8) – in general terms the job of the forwards is to win the ball for their team – at the scrum, line-out, rucks and mauls, and also to be ball-carriers to take the ball into contact situations.

Front Row players – the Props (numbers 1 and 3) go either side of the Hooker (number 2) in the scrum. The hooker ‘hooks’ the ball back in the scrum with their foot, and also usually throws the ball into a line-out.

2nd Row players - (numbers 4 and 5) form the second row of the scrum, and are usually the tallest players whose job is to win the ball at a line-out.

Back Row players – (numbers 6, 7 and 8) form the back row of the scrum. 6 and 7 are called flankers and a main job is to get to the ‘breakdown’ (when a player is tackled) to try to secure possession of the ball for their team. The number 8 also does this and is often one of the main ball-carriers in the team.

Backs (numbers 9-15) – in general terms the job of the backs is to create attacking play. They tend to be more creative, faster players who should try to exploit the spaces and possession gained by the forwards.

Scrum-half (number 9) – puts the ball into the scrum, and should try to be at the back of every ruck and maul to quickly get the ball to team-mates. Needs to be a good passer.

Fly-half (number 10) – has a lot of responsibility, will receive a lot of the ball from the scrum-half and must decide whether to run, pass or kick. Will be a good kicker and often takes the conversions and penalties.

Centres (numbers 12 and 13) – their main attacking role is to create opportunities to score by running at the defence or passing along the line. They are usually powerful and agile runners.

Wingers (numbers 11 and 14) – usually the fastest players in the team, tend to play on the sides of the pitch and often score the most tries. They should be agile to be able to dodge and avoid tackles.

Full-back (number 15) – another quick and agile player, plays a role similar to a sweeper in football – behind the other players as a last line of defence and as a counter-attacker with the ball. Will need to be a good kicker, and also may take the conversions. 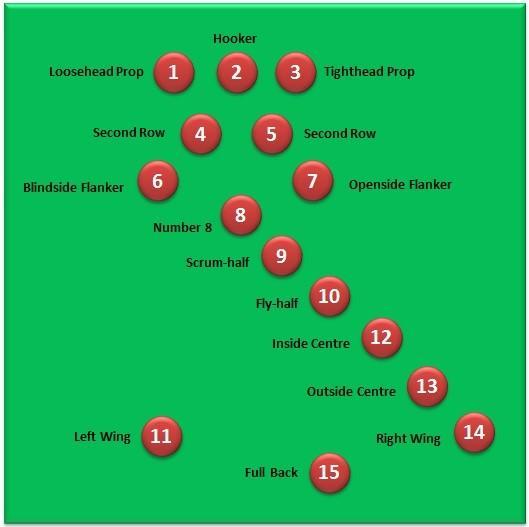 The line-out is a way of restarting play after the ball has been knocked or kicked out of play past the touch line.

A maul occurs when three or more players, including the ball carrier and at least one other player from either side, are in contact together.

What makes the maul different to the ruck is that the ball is not on the ground but in hand, but like the ruck, the offside line is the foot of the last team-mate bound to the maul.

Players can only join in from behind that team-mate. Anyone who comes in from the sides will be penalised by the referee.

The team not in possession of the ball cannot deliberately collapse the maul. This is for safety reasons.

The scrum is used for restarting play; this is usually after the ball has been knocked on, a forward pass, or the ball hasn’t come out of a ruck or maul. 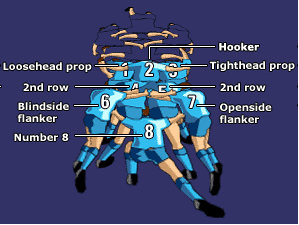